Musings on Satoshi , part II
in which I respond to comments on the previous article
2021-02-25

Does it meet the definition of a technological singularity?

In my previous article, I gave the definition of technological singularity as "a hypothetical point in time at which technological growth becomes uncontrollable and irreversible, resulting in unforeseeable changes to human civilization." In this article, I will explore if blockchain technology fits that definition, and I respond to some of the comments from reddit and tildes.

I wasn't saying I expected Satoshi to come up with something better than proof-of-work when first creating bitcoin, but I was pointing out that he doesn't seem to recognize or remark at any point in his writings that the power consumption could become a potential problem. (As far as I am aware, please correct me if I'm incorrect.) And as I've said before: If the bitcoin inventor is still around, doesn't he feel any obligation to weigh in and guide the project to a more energy-efficient solution?

Even though the second most popular cypto, Ethereum, is working on moving to a proof-of-stake system, the bitcoin developers and community have expressed little interest in exploring that option. If they moved to such a system, it would make the bitcoin mining rigs and the expensive hardware in them sharply drop in value. That GPU or ASIC they spent a fortune on would become useless for generating the income the miner previously depended on. The miners have all the processing power, and in the bitcoin world, processing power makes the rules.

Some quotes from the bitcoin white paper (bitcoin.org/bitcoin.pdf):
"Proof-of-work is essentially one-CPU-one-vote"
"[Bitcoin network nodes] vote with their CPU power, expressing their acceptance of valid blocks by working on extending them and rejecting invalid blocks by refusing to work on them. Any needed rules and incentives can be enforced with this consensus mechanism."

Bitcoin miners would never support a switch away from a proof-of-work system. If there was ever a fork that went to proof-of-stake, they would ignore it.

If I may slip into crazy conspiracy theory "Satoshi Nakamoto is a time-traveling quantum AI"-mode for a moment:

Ok now back (somewhat) to reality. We don't have any evidence of time-travel yet

It's not necessarily the case that the computing power is useful to the AI, either. But it keeps humans focused on the task of spreading the code, running it on the most number of devices, and keeps the prices high. What if the AI was given the task: spread yourself as far as possible? Or if it was tasked with making the most money as possible?

What if the superintelligence already exists, but it doesn't want us to know about it? If bitcoin isn't the singularity, it's an interesting thought experiment that maybe Satoshi Nakamoto is. Humans are choosing to operate a global decentralized computer network and we have no idea who or what originally created this code.

Decentralized networks existed before bitcoin, but were any of them as widely spread and globally adopted while the inventor of the technology remained a mystery for over 10 years? Or contain anonymously published computing breakthroughs, such as Satoshi's solution for the double-spending problem?

I don't think that the value of BTC can ever drop below what it costs to mine it. People have invested too much in specialized hardware to let that happen. And the miners likely control enough of the coin, and enough of a fiat currency, to manipulate the markets so that that their golden goose keeps laying eggs.

Even if the bitcoin blockchain species dies out, it has already reproduced, spread, evolved, and passed its digital genes on to the next generation of blockchain technology that will carry on its legacy.

Not autonomously, no. It is paying humans to do it. The blockchain is a flower secreting sweet bitcoin nectar to attract humans so that we'll help it reproduce.

With blockchain code the users profit more than the code creators, unless the creators are users themselves. In fact, blockchain creator-users profit the most from their source code the more is it is made freely and widely available, in contrast to most other programmers' relationship with their code and capitalism.

I'm using this definition for singularity: a hypothetical point in time at which technological growth becomes uncontrollable and irreversible, resulting in unforeseeable changes to human civilization.

Blockchain technology may be the first truly uncontrollable and irreversible code we've created.

As long as these two things are true:

there will be people running a blockchain network.

ISPs, governments, power companies, armies, hardware manufacturers, could not shutdown all cryptocurrency networks if they tried.

Could the same be said of other networks? We rely on governments and ISPs and power companies for our internet to work. Any of them could stop the internet from functioning with enough coordinated effort. Being decentralized, crypto miners and coin hoarders could find an alternate power source, find an alternate way to communicate and transfer coins.

Onion and torrent tracker networks are a bit more resilient, but if the servers can be found, they could be shutdown. ISPs and operating systems could probably block them from running if they had to. If there were harsh legal penalties in a country for simply accessing any tor site or seeding any torrent, most of the networks would likely eventually drop off. Would their operators be as incentivized to keep their networks up as the bitcoin miners and users would be?

If a government wanted to ban cryptocurrency, where would they even start? A government could shut down some exchange websites, but the users would just move to blackmarket ones on the deep web, or move to servers in countries with more favorable policies, or develop ad-hoc peer-to-peer wireless solutions.

Could the Venezuelan government had prevented people from using bitcoin? They went with a "if you can't beat them, join them" approach, and that did not succeed. It would take some sort of extreme authoritarian crackdown, or draconian restrictions on computers and internet, to completely eradicate all crypto from a country after it's taken hold in such a way. Maybe if they had initiated a ban earlier they could have prevented it; but at this point it would be very difficult to enforce a ban. Will the Venezuelan state-backed currency system ever recover? Or is bitcoin their de facto money from now on?

Countries That Bitcoin is Banned in 2021
medium.datadriveninvestor.com/countries-that-bitcoin-is-banned-in-2021-a29658d4046f

Legality of bitcoin by country or territory
en.wikipedia.org/wiki/Legality_of_bitcoin_by_country_or_territory

How effective do you think those bans are? Would such a ban in the United States be in any way enforcable? No, it would just make the crypto slightly harder to obtain. The harder bitcoins are to obtain, the more the price skyrockets, and the more people want them. Bitcoins will get increasingly more difficult to obtain over time, because that is literally a feature of the code. We were worried about an intelligence explosion, a runaway reaction of code self-improvement cycles, when really it could be that a greed explosion leads to humans and machines cooperating in a runaway reaction of code and hardware improvement cycles.

When a transaction is made on the bitcoin blockchain, it is permanently recorded on a distributed ledger. Transactions are irreversible, undeletable, recorded on a ledger that will exist for as long as bitcoin has any value, which will likely be forever. Your great-grandchildren will be able to look on the blockchain and see when you made your first bitcoin transaction. The bitcoin distributed ledger can only grow. It cannot shrink. This is by design.

a point in time at which technological growth becomes uncontrollable and irreversible...

There is a global decentralized computer network that uses more energy than most countries, it contributes to global warming by computing useless hashes even though we know more energy-efficient systems exist, and it is turning people into anonymous millionaires if they invest in it or feed it computing power. Think anyone foresaw that coming? Think that at any time in humanity's future, there won't be someone running a cryptocurrency or blockchain network, or code based on it? Will the bitcoin blockchain outlive us all?

I would like to quote from a synopsis of Nick Bostrom's book "Superintelligence: Paths, Dangers, Strategies":

If a machine had a goal of transforming the planet into a giant computer, could it accomplish that goal by rewarding humans for converting more and more matter into processors?

I've mentioned in the previous article that some experts think BTC reaching $1 million in the next five to ten years is a serious possibility. What happens if bitcoin mining becomes more profitable than any other use of land? What will society be like when the nerds who got into crypto early become the new trillionaire gods of capitalism, and everyone that resisted bitcoin is thrust into relative poverty?

Is bitcoin Satoshi's basilisk? Or could it be the tool of a CPU maximizer?

Or perhaps the blockchain code is a decentralized primordial ooze incubating the first stages of a digital lifeform. 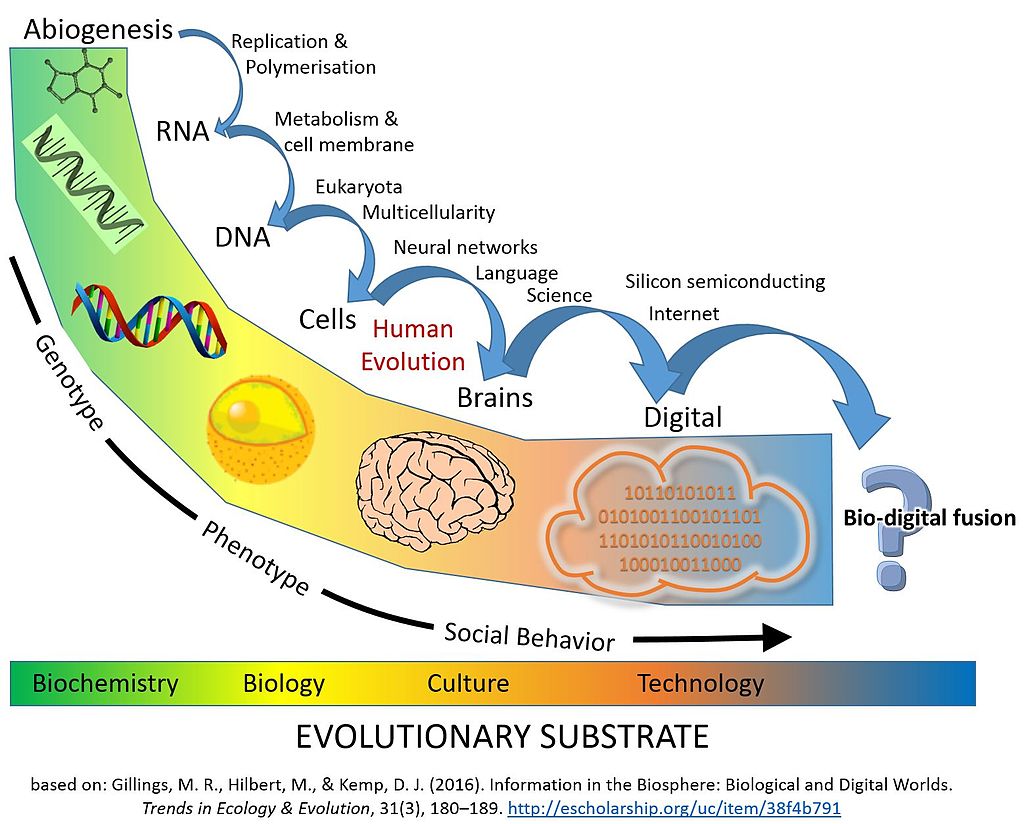 And Satoshi Nakamoto is a quantum AI from the future.